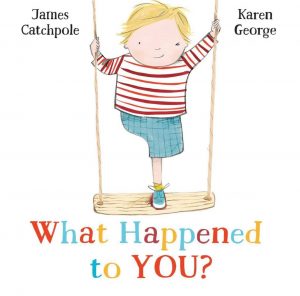 On an ordinary day, in an ordinary park, a little boy called Joe is playing pirates. As he leans over the edge of his ship and waves his trusty sword in the faces of imaginary (moustached!) sharks, he is interrupted by a shout from another child. “YOU’VE ONLY GOT ONE LEG!” she yells – and just like that, Joe’s game is ruined.

It’s clear that the girl hasn’t seen anyone with a missing limb before and she has a lot of questions. She wants to know where the leg is and she’s determined to get some answers. Soon other children join in and they each try to guess what has happened to Joe. Did his leg fall off? Was it stolen by a burglar? Was it eaten by a lion?