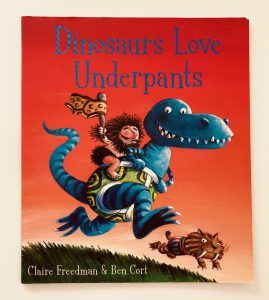 Like most toddlers, Ivy loves dinosaurs so as you can imagine we have quite a few dinosaur-themed books. This is one of her favourites and it never fails to make her laugh.

The story is about how the dinosaurs became extinct, and if you think they were wiped out by an asteroid or another mass extinction event then you are sadly mistaken. It’s all because of UNDERPANTS!

The clever little cavemen invented underpants to cover up their rude bits because they felt a little bit embarrassed when they were nude. As soon as the dinosaurs see them they are besotted with pants and they all want some, but they just don’t fit right which makes the dinos all grouchy. Soon a massive pants war is raging as they each try to get their claws on the best pairs.

The illustrations are fantastic. We love the crazed expressions on the dinosaurs faces and the myriad creative pairs of pants! The book also teaches your child a fun lesson about the benefits of sharing. If the dinosaurs had just shared those pants nicely instead of getting angry then they may still have been alive today! 😉