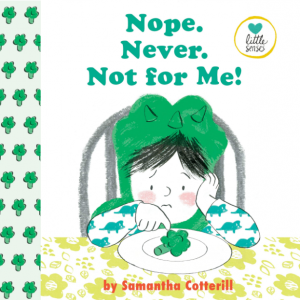 Ivy is an extremely picky eater so I like to keep an eye out for books which might encourage her to expand her tastes a little. Results are generally a bit hit and miss but we have had some success with this one so I wanted to share it with you.

The child in the story loves dinosaurs but absolutely does not like broccoli! She refuses to try it or even touch it because she thinks it looks yucky. But mum steps in with a thought which makes her think twice. She cleverly points out that broccoli looks like tiny trees and dinosaurs like to eat trees…

The girl (who is dressed in a dinosaur costume) asks if her toy dinosaur can try it first – and together they take baby steps towards a first mouthful of broccoli.

She doesn’t like it but her mum is super proud, which makes her realise that she has done something fantastic just by trying the food . She becomes a brave ‘Try”ceratops and is willing to consider trying new things. Her cry of “Nope. Never. Not for me!” becomes “Nope. Maybe. Yep! This one’s for me’ and a whole new world of yummy things opens up to her.

Ivy loves the dinosaur aspect of the book and the “Try”ceratops approach has resulted in her trying sausages and baked beans for the first time. She didn’t like either  – but at least she gave them a go!

The text doesn’t stipulate whether the child is a boy or a girl and they are drawn in a very neutral way. I like this because you can apply your own gender, depending on your child, when you’re talking about the story.

The book is part of a series called ‘Little Senses’ which is specially designed for sensitive children, both on and off the autism spectrum. Other titles include ‘This Beach Is Loud‘ (available now) and ‘Can I Play Too?‘ (publishing March 2020).