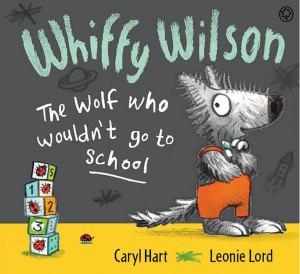 Whiffy Wilson is a little wolf who refuses to go to school. He doesn’t want to sit in a boring old classroom and learn his ABCs. He’d much rather stay at home and watch TV because that’s much more fun! This may sound a little naughty but Whiffy isn’t really a bad little wolf. Deep down he’s scared of going to school because he doesn’t know what to expect and he’s worried about getting things wrong.

This all changes when he pops next door one day and asks his friend to come and play. She’s in the middle of getting ready for school and insists that Whiffy comes along too. She drags him in to class and shows him the ropes – and soon Whiffy finds himself having fun. He paints pictures, makes biscuits, plays football and even gets a gold star from the teacher for making a flying car.