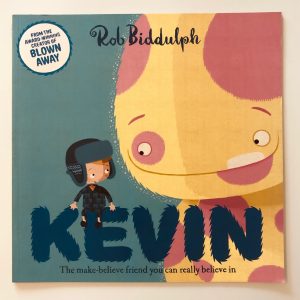 Spotting an opportunity to get away with being naughty, Sid goes off the rails. He draws on the walls, bounces on the beds, throws plates around and even turns the hose on the dog. He jumps with joy at the realisation that he can do what he wants because no one can see him.

But then Kevin’s dad appears and everything changes. Kevin is sent to bed for being naughty and as Sid watches his friend cry he suddenly understands the consequences of his actions. Can he make amends or is it already too late?

We love this book, and the simple story is very effective at teaching children why they need to take responsibility for their actions.

It’s quite text heavy for a picture book so is probably best suited to 3+, but the well constructed rhyme and the detailed, colourful illustrations mean that Ivy chooses it again and again.

There’s a whole host of fascinating little creatures in Kevin’s world and if you look carefully you might spot a few characters from some of Rob Biddulph’s other books too!