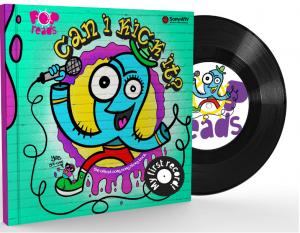 Every now and again a book pops through our letterbox which completely takes us by surprise. It doesn’t happen often, but when Pop Reads Publishing sent us a little parcel of their titles it completely changed our whole morning. When the post arrived we were quietly having breakfast in our PJs but within 10 minutes of opening this set of books we were having a mini disco in the kitchen and introducing Ivy to a host of new songs. Why? Because Pop Reads have created beautifully illustrated lyric books for kids!

The parcel contained 5 titles but Ivy’s immediate favourite was ‘Can I Kick It?’, a 1989 song from American Hip Hop collective A Tribe Called Quest. I part read/part sang the words to her and she loved the trippy, graffiti-style illustrations which ran alongside.

The other titles in the series (so far) include ABC by The Jackson Five, Perfect Day by Lou Reed, Race For The Prize by The Flaming Lips and, my own personal favourite, Girls Just Want To Have Fun by Cyndi Lauper. Each book has a different illustrative style which matches the song in question and there’s lots of interesting detail for kids to delve in to.

I think these are a fantastic idea and I found it really interesting that Ivy’s Dad was equally enthusiastic. He dived right in with the reading, started playing the songs for Ivy to dance to and enquired whether any of his favourite songs were in the pipeline for the Pop Reads treatment!

There are 2 versions of each book available – a standard version and a special edition which comes with a vinyl record featuring an instrumental version of the song.

You can find out more about Pop Reads here.

Disclosure: The publisher provided us with copies of these books in exchange for an honest review.