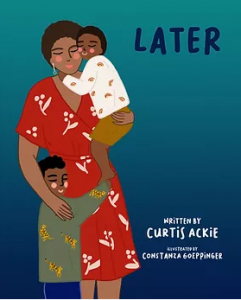 This beautiful #ownvoices book shows us an ordinary day in the life of one afro-caribbean household.

Mummy is at work but her two children are missing her very much. They trail their father around the house as he does the chores and continuously ask him when she will be back (Later!”).

As the day passes many people knock at the door and each time the kids run excitedly to open it, hoping it will be their mother. Instead they are greeted with Postman Jerry, Old Mr Longfoot, Nana and a whole host of other characters from the community. Each visitor uses a different style of greeting and speech, including some Jamaican Patois. They are all met with enthusiasm from the two children – but when will Mummy be home?

There is so much to love about this book. It’s one of those truly engaging stories where nothing and everything happens at the same time and Ivy has been completely sucked in by it. She’s particularly drawn to the illustrations and the little details around the family home – the pictures on the walls, the colouring book on the table, the utensils in the kitchen – which are so comfortingly familiar.

The story is a warm and tender snapshot of family life and I love the portrayal of the stay at home dad, which is not something we see in children’s books very often.

This is the first book from independent family publisher Formy Books who specialise in #ownvoices stories featuring black characters and cultures. They have also recently launched a Kickstarter campaign to fund four new books by black creators from across the diaspora. Find out more and donate here: https://www.kickstarter.com/projects/formybooks/formy-books-own-voices-childrens-books