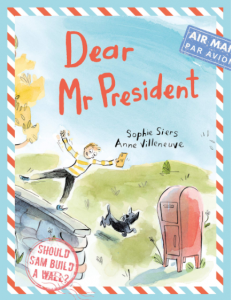 Sam shares a bedroom with his older brother and he’s really not happy with the situation. As he watches his sibling break the rules by playing on his phone late at night, he recalls something he saw on television eariler that day. The President of the USA had been talking about building a wall – perhaps this could be the answer to all of his problems?

Told through a series of letters, the story follows Sam as he explores the idea of building a wall through the middle of their bedroom so that he no longer has to deal with his brother. He posts updates to the President every day and we get to watch as the idea evolves in his mind. He thinks about how he will construct his wall, he researches famous walls from around the world and he discusses his thoughts with his parents and friends. The big question is – will the wall ever be built or will he and his brother find a way to work together for a brighter future?

This story has so much to offer and I know it will be one we can come back to again and again as Ivy gets older. Right now, it’s mainly a story about sibling rivalry for her, although we have discussed the infamous wall. The main theme we took away from the book was the importance of communication, understanding and a willingness to build bridges. She has also learned a lot about walls! The Great Wall of China, Hadrian’s Wall, the Berlin Wall and the wall at Great Zimbabwe are all discussed.

As an adult I found myself raising an eyebrow and having a wry smile at some of the allusions to the current president. Although he’s never named and we don’t see his face it’s obvious who the letters are being sent to. From the shock of bad, yellow hair peeping out from a golf cart through to an image of leftover pizza on the desk in the oval office, the authors opinion of 45 comes through loud and clear!

Note these are affiliate links and Ivys Library receives a small commission if you choose to purchase through them.