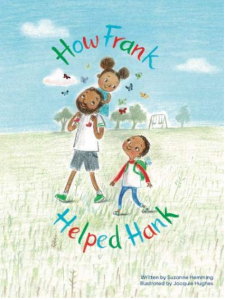 If you’ve read ‘She’s Not Good For A Girl, She’s Just Good‘ then you’ll probably recognise the central character in this story. Back then, Frank had some pretty outdated views about how girls should behave, shaming his friend Florence at school because she wanted to be good at sports. Now Frank is back and we get a sneaky peek at his home life, which offers some interesting insight into how these thoughts were formed.

Hank, Frank’s Dad, was raised to believe that boys should behave in a certain way. They should play sports, have ‘boy’s toys’ and they definitely, definitely aren’t allowed to cry. These beliefs are so firmly ingrained that he parents Frank in the same way. When Frank bangs his head he is told to ‘Man up’ and his request for a shimmering butterfly wand is met with derision. As a result, Frank has learned to hold his feelings inside, no matter how much it hurts.

However, a conversation with his friend Florence helps Frank see that it doesn’t have to be this way. She explains that, whether you’re a boy or a girl, it’s healthy to let your emotions out. If crying makes you feel better then why on earth wouldn’t you do it?

When Hank, Frank and his little sister May go for a family walk in the park a few days later, things don’t quite go as planned. Hank gets hit by a football, bitten on the bum by a dog and stung on the nose by a bee! As Frank watches his Dad lie on the floor struggling to compose himself he decides that enough is enough. Can he break the cycle and convince his dad that it’s ok to cry?

A round of applause to author Suzanne Hemming for this one! I’ve done my research and there are very few picture books out there which address the problem of toxic masculinity. Beautifully illustrated and written in gentle rhyme, this story tackles the issue head on with grace and a sprinkle of humour. It teaches children to trust their instincts, share their feelings and to always, always be true to themselves.