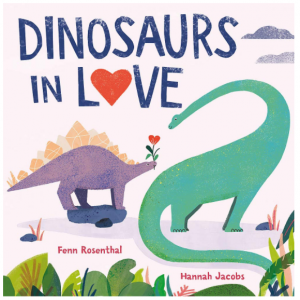 Are you one of the two million people who have listened to tiny Fenn Rosenthal sing ‘Dinosaurs in Love‘ on YouTube? If not then you MUST because it’s utterly adorable.

Fenn was just three and a half when she freestyled the song with her Dad, musician Tom Rosenthal, and the results were surprisingly profound. The lyrics have now been made into a picture book and it’s fair to say that Ivy is obsessed.

The story gives us a toddler’s take on what happened to the dinosaurs, with a little romantic spin. In a nutshell – they eat some people, have a party, fall in love and then die. The end.