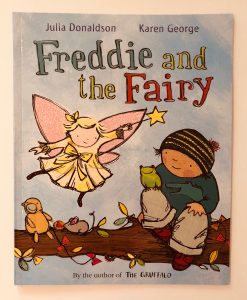 Just as the fairy starts to get upset a magical fairy queen appears in a puff of smoke. She explains that the fairy can’t hear as well as he can and teaches Freddie how to communicate better in order to help her. He learns that to be properly understood he shouldn’t mumble and he shouldn’t turn his head away or put his hand over his mouth when he speaks. Once he begins to do this his wishes really do come true!

Ivy loves this book because the bungled wishes make her laugh but it’s opened up a wider conversation about hearing and the need to speak clearly. As a parent I  hope this means that if she encounters a child with a hearing aid when she starts school she will remember Bessie-Belle and know that she can help.