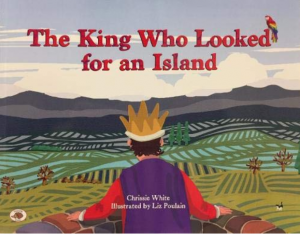 Being a King can be a lonely job, especially if you live in a castle on a plain surrounded by mountains. The monarch in this story dreams of moving to a beautiful island, but the mountains around him are so high that he can’t even tell which way the sea is!

But alas, none of the towers are tall enough to see over the mountains. The King is sad but something strange starts to happen. Drawn by the rumours of strange towers, people from all over the world begin to visit the kingdom. Soon there are fairs and sporting competitions, along with parties and gifts for the King, who is no longer lonely.

He may not have realised his ambition to move to an island, but by taking steps to achieve his dreams he has created a better world for himself and the people around him.

We LOVE this story! It teaches such a fantastic lesson and has a real old-school fairy tale feel. Ivy loves the idea of a tower of cheese and we’ve had lots of fun imagining all the crazy materials you could use to create a tower (pizza is her current favourite!).

The mix of sparse text and large detailed illustrations works really well, and I am a big fan of the fact the King’s endeavours bring a really diverse group of newcomers to his land.