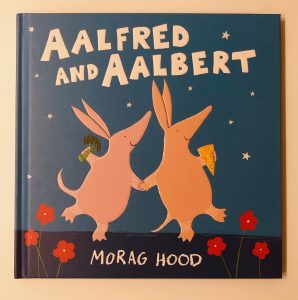 You may remember that last year we got very excited about a book called The Steves which featured two puffins arguing over the fact they share a name. Ivy loved it (and still does!) so I was over the moon to spot that the Author, Morag Hood, has just released something new.

Aalfred and Aalbert are two aardvarks who are absolutely perfect for each other but, despite being neighbours, they have never actually met. This is because Aalbert sleeps at night and Aalfred sleeps all day. Both long for companionship but don’t realise that what they are looking for is right under their nose.

Unbeknown to them, a tiny blue bird has been observing their coming and goings and decides to play matchmaker. He hatches a number of elaborate plans involving alarm clocks, broccoli and balls of red string but nothing seems to work. 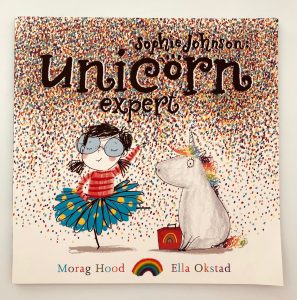 We LOVE Morag Hood (author of one of our favourite books ever), so when some friends gave this to Ivy as a gift we were really excited.

The story is about a little girl called Sophie, a self-proclaimed unicorn expert. She loves unicorns so much that she transforms all of her toys in to them using little horns attached to string, and then she teaches them all the things they need to know in order for them to reach their unicorn potential. Even her baby brother gets the unicorn treatment.

The humour arrives in the form of an actual unicorn with a real unicorn horn and a brightly-coloured rainbow mane, who somehow Sophie manages to miss completely. It’s a visual joke – the real unicorn isn’t mentioned in the text – so you’ll probably need to point it out to to your toddler, but now Ivy is aware she searches for him on every page and yells unicorn (or Oonicorm as she pronounces it!) when she spots him. 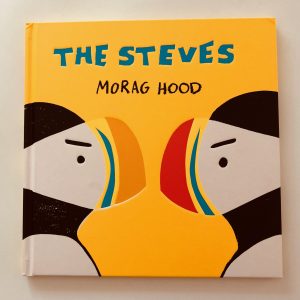 This isn’t the book I was planning to review today. We only bought this one yesterday and I usually like to have a book in the house for a few weeks before I write about it so that I can get a proper feel for it. This story is a little bit different though. It’s captured Ivy’s imagination to such an extent that I felt the need to share it with you straight away!

At the start of the story you meet a puffin who introduces himself as Steve – but on the very next page we meet another puffin, who is also called Steve! The two puffins are not happy about this development. They each want to be Steve and they don’t want to share the title.

What follows is a madcap competition to prove which one is the most Steve – the very Stevest of Steves there can be. They compare birthdays, heights, speed and fishing abilities and when none of these provide the right outcome they start trading insults instead.