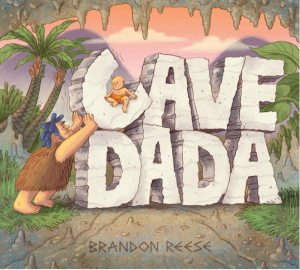 After a hard day of hunting and gathering Cave Dada is looking forward to putting his feet up – but his little baby has other ideas. He wants his father to read him a book and he’s not going to stop crying until that happens.

The father seems somewhat reluctant and suggests he plays with a rattle or snuggles his blanky instead – to no avail. Tired and a little grumpy, Cave Dada sets off to get the book and when he returns we can see why this wasn’t his first choice of activity. The book is a giant stone tablet!

Unfortunately this isn’t the book the baby wants so the tears resume until a bigger book is brought, but that turns out to be the wrong one too. Whilst travelling back and forth to gather more books Cave Dada accidentally invents fire, but still the baby is unimpressed. All he wants is his favourite story before bed.

Eventually Cave Dada realises that the only thing which is going to save the day is the biggest book they own – an enormous block of stone which requires a wooly mammoth to drag it. But when he returns, guess what? The baby has fallen asleep…

I love picture books which appeal to grown ups as well as children and this one certainly ticks that box. Ivy thinks it’s hilarious and, as a parent, I can totally relate to poor Cave Dada’s plight! All he wants is a little rest, but ultimately he will do anything for the little baby he loves so dearly.