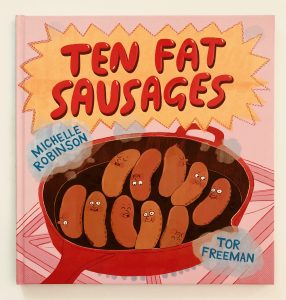 Most of you will be familiar with the old children’s counting song about ten sausages in a pan. The sausages in this book have obviously heard it too as they absolutely refuse to go POP or BANG!

Just like the song, the story starts with ten fat sausages sizzling in a pan and there is lots of counting – but that’s where the similarity ends. These sausages have minds of their own and they are on a mission to fight back! Some do unfortunately still go POP but the others manage to escape the pan and make a run for freedom. The problem is that the kitchen turns out to be way more dangerous than they anticipated!

Can they escape their fate or will they still end up as lunch?

Ivy loves the ‘Pop Pop Sausage Book’ as she calls it and we cheer on the sausages as they try to break free. The book has a great sing-song rhythm and the illustrations are really fun. We particularly like the two sausages who use onion rings to do a hula dance when they think they are safe!

It’s worth noting that some of the sausages do come to a nasty end (blenders, cats and kitchen fans all feature) so if you have a toddler with a particularly sensitive nature then this one may not be for you.