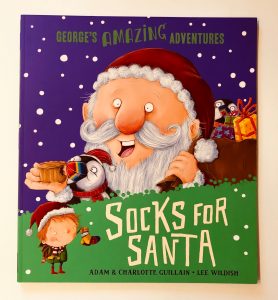 Thoughtful George has a plan. As Santa brings him presents every single year, this Christmas George decides he’s going to take some gifts to Santa instead. He makes himself a sleigh, packs a big box of presents (throwing in some extra woolly socks for himself just in case it gets cold!) and he sets off for the North Pole.

However when he gets there he is met by a little elf in despair. They are really behind at wrapping the presents and Rudolph’s nose has stopped glowing because he has flu. George mucks in to help and soon everything is ready for Santa’s journey. He digs in to his box of presents and gives the elves some treats to make them feel better and also finds a torch for Rudolph. However the other reindeer get a little over-excited at the sight of all the presents and soon the big box of gifts George had brought for Santa is empty!

When George meets the man himself he is sad that he has nothing to give him. But when he spots a giant hole in Santa’s sock he realises he might just have the perfect gift after all…

This is a really lovely story which truly embodies the spirit of Christmas. We all love a good present but George discovers that helping others in their time of need brings an even bigger sense of joy.

The illustrations in this one are fantastic. They’re bright, colourful and filled with lots of beautiful little details. There’s a cheeky little note pinned to the wall from Mrs. Claus asking Santa to bring back bread on his way home, which always makes me smile – and Ivy loves looking at the piles of presents in Santa’s workshop and naming everything she can see.