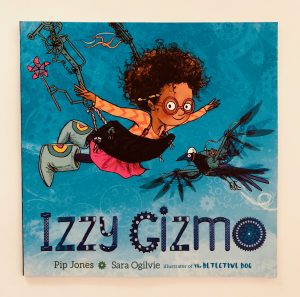 Little Izabelle loves to invent things. Her house is full of things she has made – from the Beardtastic grooming machine to the Swirly Spagsonic mealtime helper – but the problem is that they’re all in states of disrepair. Izzy loves to make things but when they break down she is too frustrated to try and fix them. She just gives up and moves on to the next project.

One day an injured crow falls in to her path. The local vet tells her that he has a broken wing which can’t be fixed so Izzy takes him home to look after him. She tries lots of ways to keep him entertained on the ground but the poor little crow just wants to be airborne again.

Spotting an opportunity to invent something new, Izzy sets about making a pair of wings but they’re too heavy and don’t work. Disillusioned, she immediately wants to give up but her grandpa and the crow won’t let her! They gently encourage her to have another go so she tries again. And again. And again.

Will her new-found patience and persistence pay off and will the  crow be able to fly again?

We love strong-willed little Izzy and the fact the story highlights the importance of being comfortable with failure. Every time Izzy’s inventions go wrong she learns something new. Kids (and adults!) are often so frightened of failure that they don’t recognise an important fact – if we don’t fail then we don’t learn to do better. This book teaches this in spades, along with the value of persevering even when the going gets tough.