Every now and again a book comes our way which both captures Ivy’s imagination and brings me to tears, and this is most definitely one of those books.

The simple, yet extremely moving, story is about the relationship between a little girl and  her favourite dress. The girl and the dress are the best of friends and they go on many adventures together. They play and explore but they also stare out at the ocean and wish for something more.

One day the girl discovers that everything is about to change. The dress is bundled in to a trunk and the girl and her family take a long journey on a boat to start a new life in New York. But somehow the trunk is lost in the hustle and bustle of their arrival. The dress finds itself alone and the girl does not come back. 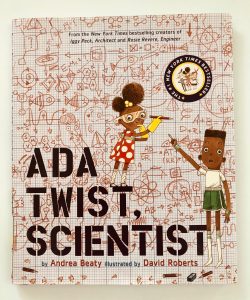 Little Ada drives her parents to distraction because she refuses to talk. Whilst all the children around her are starting to spout their first words, Ada just silently observes the world around her. Then she turns 3 and suddenly everything changes. She starts to talk and she just can’t stop. She wants to know why? when? where? how? and she needs the answers right now!

Ada’s endless need to question everything means that she is a perfect mini scientist. She devises experiments and builds hypotheses, trying to work out how everything she encounters works. This causes new problems for her parents however, as Ada pushes them to their limits with her constant questioning and tinkering.

One days she smells something horrible whilst playing in the garden and vows to track down the source. Can she puzzle it out? And how will her parents react when she starts experimenting on the cat and scribbling equations on the walls? 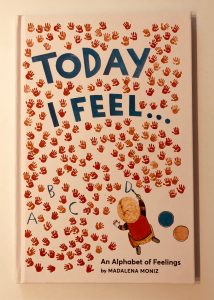 I bought this book online on a whim purely because I fell in love with the artwork on the front. I had no idea what it was about or whether it was any good but fortunately when it arrived the contents lived up to the cover!

The book is an alphabet of feelings, with each double page dedicated to one letter/emotion and a corresponding image. The range of emotions covered is really wide and the beautiful illustrations and colours give a fantastic sense of how each one feels.

From Adored and Brilliant to Yucky and Zzzz (via Jealous, Patient and Warm) this gorgeous book is a fantastic way to start discussing emotions and feelings with your child. 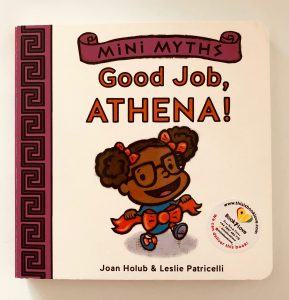 We recently discovered the Mini Myths series and we’re busy collecting the whole set! Each book takes a well-known tale from Greek mythology and distils it in to a simple modern day story which is relevant relevant to toddlers.

This particular book takes the myth of Arachne and Athena (about hubris and boastfulness) and turns it in to a story which would be very familiar to most pre-schoolers.

In this re-telling Athena is very good at tying bows. Arachne is not as skilled at bow-tying but would very much like lovely bows on her shoes. Athena is a good friend and she ties some nice bows for her. Arachne boasts to the whole class that her bows are the best but she fails to credit poor Athena for having tied them. What will happen when another child in the class asks Arachne to pass on her skill? Will she be able to admit that Athena actually did all the hard work?

We love the simple but spellbinding illustrations (by Leslie Patricelli) and the easy to digest parable. Other myths in the series include Pandora, Hercules, Medusa, Midas, Icarus, Aphrodite and Odysseus. 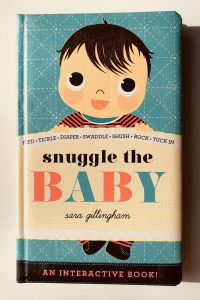 This book is so fantastic that I can’t really do it justice in a mini review. It’s beautifully illustrated, well thought out and a great interactive learning tool.

The book itself talks about babies – how to look after them, how to play with them and how to show them love. However what lifts this above other books about babies is the fact you can interact with the pictures and even take the baby and her bottle out of the book to play with.

Ivy loves getting the baby out and keeping it by her side – kissing her, talking to her, feeding her milk and rocking her back and forth – but she always makes sure that she puts her safely back to bed in the back of the book so she doesn’t get lost.