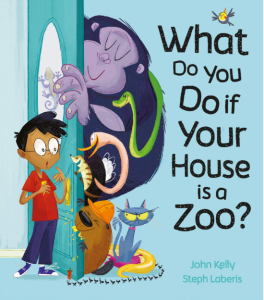 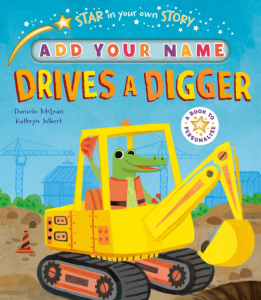 When I was a kid it really bugged me that I could never, ever find anything with my name on. For years I secretly coveted a tacky china mug or a fake leather key chain with ‘Shelley’ proudly emblazoned on it, but unfortunately it was never meant to be. The idea of an actual book featuring my name would have totally blown my mind, so I was delighted to discover this new series from Little Tiger. Each title comes with a set of alphabet stickers which allow you to personalise the story and become the star of your own story!

There are a number of books in this new series but this one is Ivy’s favourite. It places you front and centre at a busy building site where you are in charge of a shiny yellow digger. You need to gouge out the earth and dig a deep hole, but your progress is hampered when you hit a mysterious object with a loud clang! Can you recover it and find out exactly what it is? 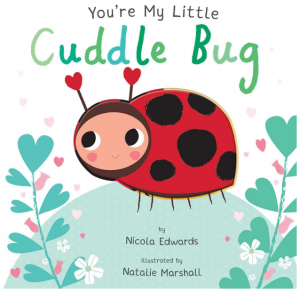 This adorable board book is perfect for a snuggly read before bed. The chunky pages are designed for very small children but Ivy is three and a half and still loves it!

The gentle rhyme celebrates the special bond between parent and child, as we see ladybirds, bumblebees, caterpillars and butterflies cuddle up with their nearest and dearest. I love the choice of language used to describe how the baby bugs make the parent feel.  We have even adopted the phrase ‘You tickly pickle’ because Ivy thought it was hilarious!

The pages feature cutouts and raised sections to keep little hands busy and the durable format should foil even the most determined book chewers! 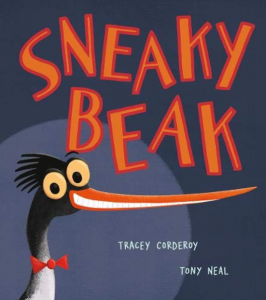 Usually I like to have a book in the house for at least 2 weeks before I sit down and review it. This ensures that we’ve read it multiple times and that I have had ample opportunity to observe how Ivy feels about a story. However I am breaking with tradition with this one as she is totally in love. We only received this book yesterday afternoon but we’re already well in to double figures on the number of times it’s been read!

Bear and Hamster are the best of friends. They are very happy living together in their little house, but every time they turn on the TV they are subjected to very loud adverts from an extremely persuasive salesbird called Sneaky Beak. They laugh at the ads together but in bed at night Bear finds himself wondering if perhaps he is missing out. As he feels a bed spring ping beneath him, he thinks that maybe he might need Sneaky Beak’s help. 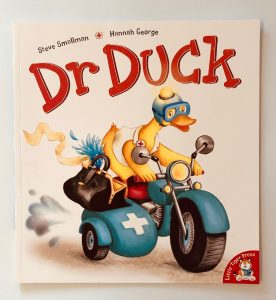 If your little one is feeling under the weather then this funny book about an unusual doctor and his patients may be just the thing to cheer them up.

When the animals at his zoo start to fall ill, the zookeeper decides to call the local doctor – Dr Duck! When he arrives he discovers a porcupine who has sneezed so much that all her spines have shot out, a giraffe with a stiff neck, a snake with a high temperature,  a mildly depressed hyena and a gorilla with wind. Dr Duck’s cures are unconventional to say the least but they seem to work and soon everyone is feeling better and relaxing in the hot tub.

Everyone that is except the poor farting gorilla. Dr Duck had prescribed some large pants with extra strong elastic to trap the smell of his stinky bottom burps – but the knickers have blown up like a balloon and the gorilla has floated off in to the sky. Can the ingenious doctor find a way to bring him back to earth before its too late? 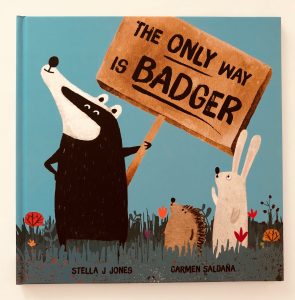 This beautifully illustrated book about a group of woodland animals is extremely topical and we love it!

Badger is very proud of being a badger and he thinks that badgers are best. So much so that he thinks that everyone should be a badger! To try and make this a reality he builds a wall around the forest and puts posters up on all the trees encouraging the other animals to ‘be more badger’.

He’s a very confident public speaker so when he tells everyone that badgers are best the animals begin to wonder if he could be right and they question their own identities. 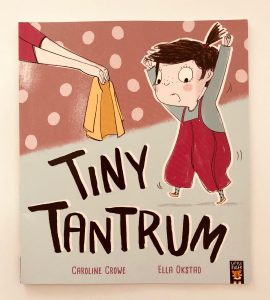 We were recently recommended this book by one of our followers and i’m really happy we bought it as it’s fantastic. Ivy has recently turned two and a half so tantrums are (unfortunately!) now a part of everyday life. This means I am always on the lookout for books which may alleviate the stress a little!

The story is about a little girl called Tiny who has lots of tantrums. Every time her mummy asks her to do something she yells and screams and stamps her feet, refusing to oblige. However one day she is joined by an array of fluffy monsters who help her understand that there are better ways of dealing with her anger. From wiggling your bottom to flushing your tantrums down the loo, these monsters have lots of creative ideas on how to get rid of the grumps.

This one gets a big thumbs up from us as it makes Ivy laugh out loud. Additionally, there are lots of opportunities to put on silly monster voices and there’s a funky song at the end. The illustrations are lovely and definitely capture the drama of being a toddler! 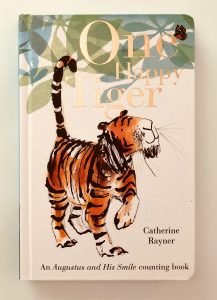 We love ‘Augustus and His Smile‘ by Catherine Rayner so we were really excited to see this lovely counting book which features the same character.

The book starts with lovely Augustus sitting on his own feeling lonely, but as we slowly count from 1 to 10 he meets some new friends, including bugs, birds, butterflies and bees.

This feels like it has a little more depth than your average counting book because the themes of friendship and nature are central to the simple narrative. As always, Catherine Rayner‘s illustrations are breathtaking and the animals seem to jump off the page.

If you’re looking for a baby or toddler gift that is educational, sturdy and beautiful to look at then this would be perfect. 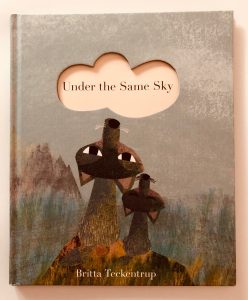 This beautiful book from Britta Teckentrup takes us on a journey around the world and shows us animals in many different habitats all united by one common thread.

The poignant illustrations and the cleverly arranged cut-out sections draw your child in and encourage them to peek through to the next page, whilst the thoughtful text teaches an important lesson. We are all different but we all share the same hopes and dreams for ourselves and our loved ones. If we unite and celebrate our similarities and differences then the world will be a better place for all of us. 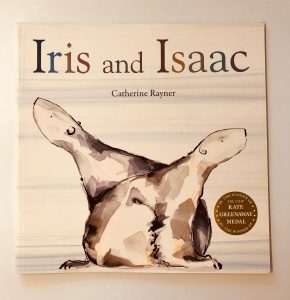 Iris and Isaac are beautiful polar bears and they are best friends. However their inability to share causes them to have  a little falling out. Iris makes a snow nest which is a bit too small for both of them to snuggle up in. They each try to squish their big bottoms in, trying to get a bigger space for themselves but they end up destroying the whole nest and walking away from each other in a huff.

However they soon discover that life can be pretty sad without someone to share it with. When Iris spots a flock of snowy white ducks in flight she wishes she could tell Isaac about it – and Isaac spots the northern lights he wishes Iris was there to share the moment with him.

Can these lovely bears learn to share so they can be friends again?